By Brett B. JIFU Success, JIFUshop No Comments

As we round the corner into spring, JIFU wanted to share some products that will have you excited and prepared for the flowers, beautiful spring rainstorms, and all the other joys that spring brings. Don’t forget to browse JIFUshop.com for all your spring essentials. This cooler is the perfect addition to any spring cookout. Keep your drinks cool and your friends close for hours!

This refreshing beverage is the perfect way to stay hydrated and healthy as the weather begins to warm up.

Spending more time outside requires accessories and the perfect addition is this firepit. Become a pro by the time the summer nights role around and your backyard will become the hangout spot of the season! 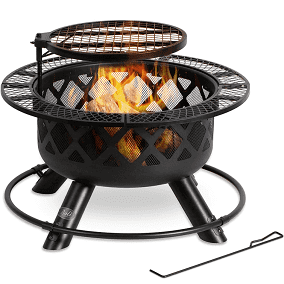 As we break out the short sleeves and shorts, a dash of at-home tanner can help boost your confidence. This bronzer adds a shimmery glow that the spring sun will compliment well. Spring showers bring May flowers… and these stunningly practical rain boots available for men and women. This insulated can cooler is a great beverage accessory for any time of the year, but spring encourages more outdoor hang time than others. These natural energy shots give you a boost of energy without unwanted jitters. The days are getting longer and Fire Bird may be just what you need to get more done during the long months. Perfectly portable, this inflatable hot tub is easily brought with you wherever your adventure takes you.

Comment below which product you’re thinking about picking up for the spring months. Shop JIFU to earn points, get rewards, and save money! How CBD Oil Can Improve Your Life

CBD has been touted as an aid for a wide variety of health issues and is easily consumable because it comes in many different forms(oil, gummies, lotion etc.). JIFU has compiled a list of five of the reasons that CBD oils have skyrocketed in popularity.

Can Reduce Stress and Unexplained Sadness in Some Users

People use CBD oil and other CBD-based products for different reasons, including reducing pain, controlling anxiety, and managing seizures. JIFUshop’s partner vendor, TiQUE, offers a comprehensive line of top tier CBD products. Shop JIFUshop.com today to try them for yourself! More than ever, people are becoming aware of what incredible economic value that e-commerce offers. Buying, trading, and selling online has revolutionized the way consumers obtain goods and services. It has completely changed the way that online marketplaces operate, even going so far as to close the doors of physical stores.

The e-commerce market has skyrocketed in popularity due, in part, to the ease of access and convenience that it provides. Consumers are led by fleeting desires, and online marketplaces can satisfy their cravings as soon as they appear. With a few clicks of the mouse or taps of the finger, people can fulfill their wildest wish and have it shipped to their doorstep the next day.

Vendor-specific online stores can not offer a very wide range of products because of the limitations that come with doing business with a single vendor, but online marketplaces aggregate a massive amount of options from different vendors. Consumer transactions are processed by the marketplace, but each order is fulfilled by each wholesaler, which is far more efficient for buyers and sellers.

By the end of 2020, global e-commerce sales could reach $4.2 trillion. This is according to a report that was done by Shopify in early 2019. 2020 in particular gave a huge boost to online marketplaces. Even before this year, drop shipping, e-commerce, and online marketplaces were quickly rising to the top.

Then the global pandemic forced millions of people to stay at home and thousands of physical storefronts to close their doors. As a result, U.S. e-commerce sales will hit a projected $709.78 billion in 2020, or about 14.5% of total U.S. retail sales, up from $601.65 billion, or about 11% of total retail sales, since 2019. In fact, JIFU’s own e-commerce site is projected to follow a similar pattern when it launches in 2021.Jifu’s amplified business strategies include a incredible combination of e-commerce and cryptocurrency with JIFUcoin*.

These incredible opportunities are being realized and actualized, thanks to a little encouragement from innovation’s biggest initiator: necessity.

The value of online marketplaces jumped through the roof this year, and JIFU is integrating our own online shop into the incredible services we already provide. This is just another example of JIFU boldly looking into the future and making it a real part of the present.

*JIFUcoin is not available for purchase in the US, Columbia, and wherever prohibited by law. Marketing has come a long way since the days of “Mad Men” and the marketing giants of the ‘50’s, but some still don’t understand the extent to which marketing has completely changed into an industry that is almost unrecognizable.

The advancement of technology has created entire industries and careers that did not exist 20 years ago. One massive example of this phenomenon is what is known as influencer marketing, and its existence has changed the way that companies sell products forever.

If you haven’t heard of influencer marketing, chances are you have seen it in action, but just weren’t aware that it had a name. Essentially, it is a digital marketing strategy that consists of achieving a series of collaborative connections between companies and those people with high visibility and prominence on the internet. These people are known as ‘influencers.’

JIFU and countless other companies pay individuals to use the power of an influencer’s online presence to help sell experiences and products.

Social networks were created to connect people and groups to each other, regardless of location. This is clearly a beneficial system for brands to use to their advantage, and often they will pay influencers very well to do just this. Online influencers are followed by a target audience that are often very consumerist and whose opinions are easily impacted by the influencer. The brand is able to advertise to a more direct audience and increase their own online presence.

In order to become an influencer, someone must have an open mind, perseverance, and dedication. Aside from these characteristics, it’s also important to master the leading social networks and create beautiful content to elevate them within their niche.

Often, brands will pay more to influencers who have more interaction. Someone may have a lot of followers, but if they have low engagement, they could be paid less than someone who has less followers on social media than them.

For example, Christiano Ronaldo has 240 million followers on instagram and a reported engagement of 2.22%. This means that 5,328,000 people engage on average with each post he makes, which is a decent interaction ratio.

However, nano-influencers (1,000-10,000 followers) can make a reasonable amount of money as well, as long as they have consistently good engagement. Micro-influencers(10,000-50,000 followers) generally make $100–$500 per post, again depending on several factors.

So how much do they make? It all depends on the brand, the influencer, and the platform. However, no matter your reach or your niche, there is money to be had. The influencer marketing industry is on track to be worth up to $15 billion by 2022 according to Business Insider.